Our present day society runs on algorithms. We accept the influence of apps and artificial intelligence on our life. But is it acceptable that we have no clue about the underlying algorithms? Shouldn't we try to take back control? IF_THIS_THEN_I is a step into that direction. It's an app that offers the ease of following instructions from an algorithm, like we're used to. But it lets you define the rules that affect you.

We've gotten used to having our mobile phone within reach during so many occasions during the day. But besides being a passive instrument, the phone is claiming a more active role with more and more pro-active assistance. Google Maps warns us on time that our last train leaves. Facebook and Instagram suggest who we should add as a friend. But it will not take long before this technology will not only suggest us with who we do what, but it will suggest what to do and say. This influence will be making a leap once the era of augmented reality glasses arrives. It will not be easy to ignore the the suggestions and tips that will appear in-your-face. You might be told you're talking to the wrong person at a company event. Or you might get conversation suggestions if you are talking to a relevant person with whom a specific goal needs to be accomplished. Even if you do not yet about it that yourself. Thanks to AI, software knows us better than we know ourselves.

Gradually the number of situations in which we trust algorithms is growing. New features are added in an unsolicited way and if the input and information they provide is is correct and valuable the automated control is part of our assets and soon we can't even live without it. We try to make it suit our life by adjusting the settings. But how to know for certain that the algorithm really does the right thing with your preferences? What if you want to make your own choices? You might wish Google to leave you alone for a day. Or perhaps you would want to use Facebook with your own rules, without an algorithm determining what you get to see?

It's about time that these systems that control us are built up in a modular way We have a right be free to choose which algorithms are allowed to interfere with us. The need could give rise to a marketplace for algorithms, each with their own specific characteristics. Some people might prefer quality, privacy or finegrained configurable options. Other people might be okay with freemium versions, with ads appearing once in a while. And there might be folks who want to develop their own self-made 'engines' to configure their own rules. With the IF_THIS_THEN_I system that is possible. It consists of a web-app that allows you to set the conditions and rules that determine what you'll do based on which condition. And so the app can list your tasks, when conditions are triggered. A first pilot of the system was tested during the Oddstream art & technology festival in Arnhem The Netherlands. A number of people around a table there was the setting chosen to be the context for the definition of the rules. Rules like: IF somebody sits on chair 1 THEN I'll sit under the table. IF everybody is sitting under the table THEN I will sing. IF somebody sings THEN I am happy. IF nobody is happy THEN I put my phone in my pocket.

Each time when one of the participants performs a task from his/her list and confirms the action is taking place, the background system updates all the rules stating if nobody, anybody or everybody is doing something. And it continues to check if the action by one participant triggered a task from the task list of one of the other participant. If so, the task is shown on the phone and a sound is played. The participants are directly connected because of these interconnected rules, even though bystanders mainly saw a group of people staring individually and obsessed on their own mobile.

But what if staring at our phones becomes a thing of the past, when wearing augmented reality glasses becomes the new standard? What if the interference and control from Silicon Valley will happen unnoticed and invisible? With that prospect and because of worries that society might then be out of control when, we'd better work on some alternatives, soon. There's no time to lose, and there's an audience to grow. An audience of people aware of the complete picture, knowing about the importance of having alternatives, and freedom to choose. Chances are that the new generation of devices will feel comfortable and work convincingly good, considering the many man-years of work that is already being put into the development of the upcoming AR technology and considering the ever ongoing gathering of data about us. Who will be willing to swap a service that is knowing so perfectly what we want, when we want it?

But when the price for that quality service is to be monitored and controlled by the cloud to do only the things that are right or have calculated positive outcomes, to what extent do we still have control over our own lives? Is that limited to the options in the configuration screen? A completely self-directed IF_this_THEN_I system to define your own actions is the other extreme, unrealistic and unworkable. But the existence of alternatives helps to think about a proper middle way that is acceptable to us. 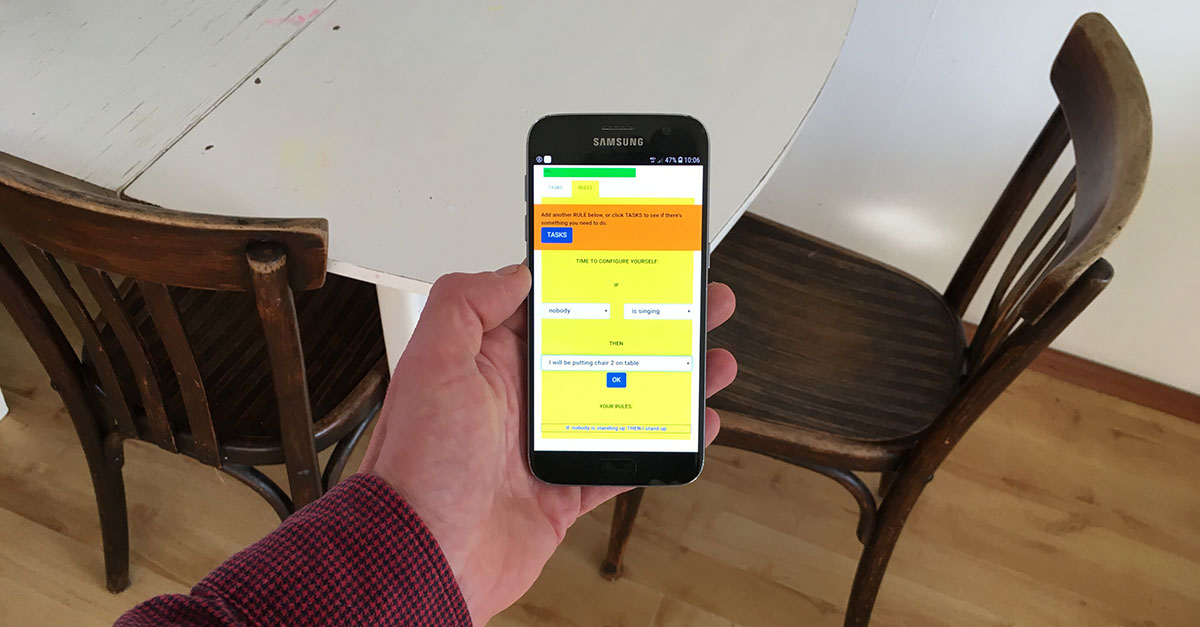